The telomeric sync model of speciation 2014 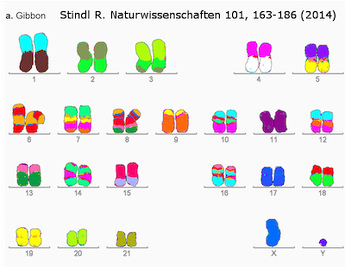 With the rise of modern evolutionary synthesis in the 1940s mathematicians and molecular geneticists had almost completely replaced paleontologists in the scientific field of evolution. Complex mathematical models and experiments on fruit flies had been regarded superior to direct observations from the fossil record. As John M. Smith put it in a Nature commentary: "Since that time, the attitude of population geneticists to any paleontologist rash enough to offer a contribution to evolutionary theory has been to tell him to go away and find another fossil, and not to bother the grownups".
In his book The New Evolutionary Timetable, the American paleontologist Steven M. Stanley convincingly describes what the major problems of Darwinism and the modern evolutionary synthesis are. He states that the Pleistocene sediments at thousands of collecting sites have uncovered at least 85 % of the mammalian species living today, and therefore the fossil record can no longer be regarded as providing an incomplete picture of evolution (Stanley 1984, p. 97). Most importantly, Stanley mentions the puzzling paleontological fact that within less than 12 million years, most of the living orders of mammals developed, including such diverse animals as lions, wolves, bears, horses, rhinos, deer, pigs, antelopes, sheep, bats and whales, all having descended from a tiny animal resembling a small rodent (Stanley 1984, p. 93). He further concluded: "We can now show that fossil mammal populations assigned to a particular Cenozoic lineage typically span the better part of a million years without displaying sufficient net change to be recognized as a new species. (…) If an average chronospecies lasts nearly a million years, or even longer, and we have at our disposal only ten million years, then we have only ten or 15 chronospecies to align, end-to-end, to form a continuous lineage connecting our primitive little mammal with a bat or a whale" (Stanley 1984, p. 93). "Our only reasonable recourse is to abandon gradualism in favor of punctuated evolution, which can account for the rapid changes for which we see evidence. These changes must have been brought about by strongly divergent steps that came in rapid succession" (Stanley 1984, p. 90)

According to Thomas Kuhn, a discipline within sciences is not even receptive to a paradigm shift, unless the discipline is in a state of crisis, produced by the accumulation of critical findings that resist explanation (Kuhn 2012). Over more than a century, several natural observations have accumulated that are rather incompatible with "Darwin's selection for the fittest reproducer" as the driving force behind speciation. Let me just highlight one of them, the seasonal migration of Eastern North American monarch butterflies, which rather screams for an explanation. Every spring these butterflies start from a small area covered by pine forests in central Mexico heading north. It takes several migrating generations of butterflies during summer to reach their northern destination, which is southeastern Canada. During fall, a new generation of monarchs migrates south to exactly the same pine forests in central Mexico their ancestors have overwintered in (Reppert et al. 2010). How can sporadic gene mutations ever lead to such a stunning multigenerational group behavior, when selection can only work on single individuals in a stable environment. A random mutation in monarchs, which sets their compass to north, is great during spring and summer, but kills the whole variant lineage of butterflies in fall. Consequently, the complete multigenerational migration pattern can only evolve in a saltatory manner at once, without any adaptation to the local environment.

In my 2014 paper, I present an alternative to Darwin's gradualistic theory and provide a biological framework for the old European concept of saltatory evolution, summarized best in Otto H. Schindewolf's book, Basic Questions in Paleontology (Schindewolf 1993). The high quality of the fossil record in sediments of ancient oceans guarantee that Schindewolf's extensive studies of corals and cephalopods are superior to the currently dominant genetic models of modern laboratory based scientists. As a consequence, my telomeric sync model of speciation mainly builds on Schindewolf's typostrophic theory. In short, I propose that transgenerational telomere erosion leads to identical chromosome fusions and triggers a transposon-mediated genomic repatterning in many individuals at once. The phenotypic outcome of the telomere triggered and transposon-mediated repatterning is the saltatory appearance of nonadaptive characters in new species, which is in perfect agreement with the fossil record. Transgenerational telomere erosion gives species a sense of time and is therefore the material basis of aging at the species level. According to the telomeric sync model of speciation, speciation events can be triggered suddenly and simultaneously, eventually synchronizing the transformation of a whole interconnected biotope of many plant and animal species within a relatively short time frame.

The Viennese Cancer Cascade: Short telomeres beget aneuploidy, which results in a differentiation-block of stem cells 2008 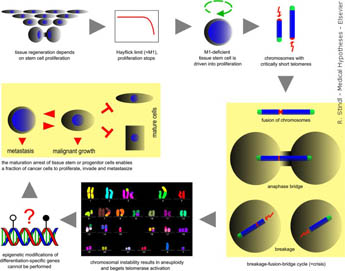 The claim was made by the Robert A. Weinberg group that three defined genetic elements (1) suffice to produce a human malignant tumour. (However, after a while it turned out that the authors mistakenly introduced at least four “defined genetic elements”; instead of a large T vector and in addition to hTERT and H-ras, a vector containing the entire SV40 early region including small and large T was used (2).)
Peter Duesberg (University of California at Berkeley) challenged these experiments (
3, 4). As a visiting scholar in his lab, I found that 100% of the supposedly diploid tumour cells (HA1ER-2, HA1ER-3) contained unbalanced chromosome aberrations (5, 6). Identical chromosomal rearrangements were present in a large fraction (up to 89%) of the cells, which cannot be explained by the “outgrow of aneuploid variants” (5, 6) - after just 1 week in cell culture. My letter to Cancer Research was rejected in 2002. Since then, I am convinced that unbalanced chromosomal aberrations play an essential role in the causation of epithelial cancer (=carcinoma). The paper 'Defining the steps that lead to cancer: ...' has been published in 2008. 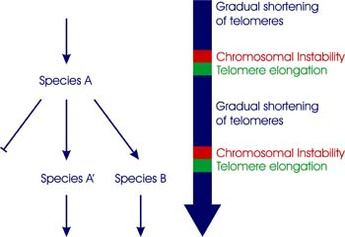 In August 2001, I started to develop a new theory of species extinction. According to the species clock hypothesis, telomere erosion between generations of a species leads to a populationwide telomere crisis and finally extinction (or the appearance of a new chromosomal race). An indicator for extinction would be a rise in the incidence of e.g. cancer, vascular disease, immunosenescence and diabetes; diseases which have been linked to short telomeres and exhausted tissue regeneration. Most importantly, fertility would go down in the population. The paper has been published in 2004. What we currently see in humans, is an increase of the so-called age-associated diseases...even in the middle-aged! 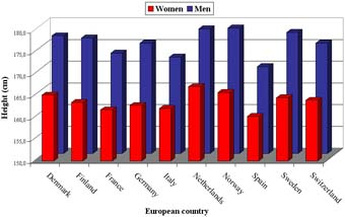 In developed countries, the average gap in life expectancy between the sexes is 7 years. It has widened over the last decades, despite the trend of women copying the ‘unhealthy’ lifestyle of men. On average, women do have longer telomeres than men at the same age, although mean telomere length at birth does not show any sex-related differences. This is almost certainly a consequence of men being usually taller than women, although nobody has done an investigation yet. Clearly, a larger body requires more cell doublings, especially due to the ongoing regeneration of tissues over a lifetime. The paper has been published in 2004.